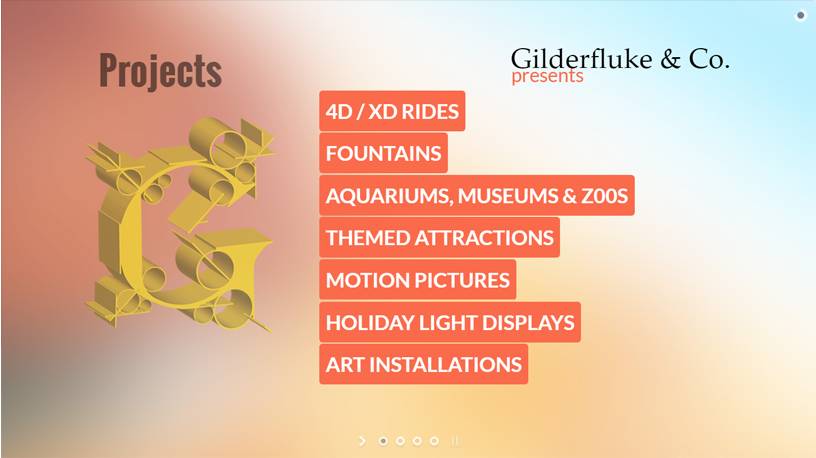 The Busan Citizens Park 3D + 4D Theater for children, is located on the first basement level of Visitor Center with 41 seats. There are 12 sessions per day, showing various films.

Artist Michael Thomas Hill’s “Forgotten Songs” is a permanent public art installation comprising 180 bird cages that play a soundscape of birdsong using a Sd-25. The calls are from bird species that used to live in the city before the arrival of Europeans. During the day, you may hear the calls of the Eastern Whipbird, Rockwarbler, Regent Honeyeater, Grey Shrike-thrush, Fan-tailed Cuckoo, Spotted Pardalote, Brown Gerygone, Jacky Winter, Scarlet Robin and many others. At night, the soundtrack switches to nocturnal birds like the Australian Owlet-nightjar, Powerful Owl, Southern Boobook, Barn Owl, Tawny Frogmouth, and White-throated Nightjar.

“Bench Scenes” is a sound installation in Stamford, Connecticut (at the intersection of Broad and Atlantic Streets) that was designed by artist Regan Avery and installed by Max Avery Lichtenstein. This commissioned bench uses a Sd-25 to play audio excerpts of movie scenes that take place on a bench.The Sd-25 is installed into the bench in a waterproof box and is powered by a 12 volt 18 Ah rechargeable battery. Visitors to the bench press a button to trigger playback of the movie sound clips.

The “Tap Dancer” built by Stephan von Huene in 1967 was brought back to life for an exhibition at the Getty Museum in Los Angeles.

Noted Illusion designer and builder, John Gaughan, assisted by longtime GilderUser Larry Odien, completed the restoration and upgrade to a Pb-DMX/08 controller in only ten days.

Made from beautifully crafted wood and molded leather, the “Tap Dancer” stands on a simple base with four removable sides that conceal a complex network of circuit boards, wiring, and mechanical constructions. The movement runs for three minutes and then stops for a set period of time before it starts again.

Kilroy and Klaus were commissioned for the live event “Man in the Moon”, which was held July 6, 2013 at USANA Amphitheater in Salt Lake City, Utah. These two large animatronic figures, measuring 9′ W (18′ arms out to the side) × 15′ H (17′ standing up) × 15′ D (20′ arms raised forward), became key features to the event as they stood on either side of the stage “framing” the projection mapping and performance of the event.

Andrew Smith Art animation control for Kilroy and Klaus uses Gilderfluke’s show control sytem PC•Macs and USB-Slider Console with a sixteen analog output Br-ANA mounted in a Br-CC08 card cage and a two ServoMotor and eight output Br-miniBrick8 stand-alone show control system. This configuration allows each figure to be programmed individually or run in sync with each other. Different animation sequences were created and then saved on an SD card, allowing limitless sequences for Kilroy and Klaus.

Artist Dan Corson’s “Sonic Bloom” was commissioned by the Pacific Science Center and Seattle City Light’s Green Up Program. Sonic Bloom is comprised of 5 flowers that are 20′ diameter and up to 40′ tall. They are made of steel, fiberglass, custom photo voltaic cells, LEDs, sensors, interactive sound system and energy data monitoring.

The Stoneridge Creek Fountain in Pleasanton, Califorinia uses Gilderfluke’s Sd-50/8 as the Control System, DMX-512 controller for lighting, audio player, amplification system, and 365 day scheduler for when the shows are played. The two Br-ANAs receive DMX-512 from the Sd-50/8 to directly control the analog water valves.

The Stoneridge Creek Fountain was made possible by the following companies:

The Fountain of Rings is the centerpiece of Centennial Olympic Park and is one of the most recognized and photographed landmarks in Georgia. Millions of international and local guests visit the Park every year to enjoy the world’s largest interactive fountain featuring the Olympic Ring symbol.

The Peace on Earth Fountain at the Los Angeles Music Center surrounds the Peace on Earth sculpture by Jacques Lipchitz. WET Design designed the fountain and created the choreography that contols the 280 jets that systematically shoot water up into the air on a 14 minute cycle.

Holding court in the center of the Ray Charles Plaza is a life-size bronze sculpture of the pioneering blues musician, seated at a baby Grand piano which rests on a rotating pedestal. While Ray Charles’ beloved melodies play at timed intervals, water flows over the pedestal and spills into a reflecting pool at its base. Grab a piano key bench and enjoy the concert. Show control for the fountain, lighting and rotating pedestal is provided by an Sd-50/40.

The LA DWP (Los Angeles Department of Water & Power) Fountain at the John Ferraro Building uses a Sd-50/08 Show Controller, that has been programmed with multiple color changing shows. The building management software is able to trigger the unit.

As part of the renovation of the 110 year old fountain, Gilderfluke was brought in to update the functioning of the fountain by providing show control, automation panels and all fountain programming. On May 4, 2016, the Horton Plaza Park officially reopened and the renovated fountain was turned on.

The Sahaj Anand Water Show calls the Yagnapurush Kund its home. A replica of grand traditional step-wells, it measures 300′ x 3003 and has 2,870 steps and 108 small shrines. The nine-lotus design of the central pool is a replication of a ritual yantra or arrangement used in sacred Hindu ceremonies. At the head of the step-well is the 27 feet tall bronze murti of Neelkanth Varni. He presides over the step-well inspiring determination, devotion and courage in all who catch his sight.

In the 1999 release of Inspector Gadget, the Gadgetmobile is a silver 1964 Lincoln Continental convertible with a male persona artificial intelligence. Animated by GilderGear, the front bumper is the mouth, which can smile and frown and headlights are the eyes that blink.

Gilderfluke & Co.’s USB Motion Base Joystick is used in the production of the Matrix Reloaded freeway scene where the evil Agent Smith jumps from car to car.

Animatronics Designer, Adrien Morot created a shriveled human figure for a scene in which Gul’dan sucks the life-force from an unfortunate human victim. “It was a mix of animatronics and puppetry,” said Morot. “Duncan Jones (Director) wanted to see this guy breathing and gasping for air, and then collapsing on the floor.” Morot’s team sculpted the character’s translucent anatomy in overlapping layers, using urethane resin to cast the skeleton, and silicone for muscles and internal organs, before wrapping the whole assembly in a flexible skin of Smooth-On Sorta-Clear translucent silicone rubber. Bladders and servo-operated mechanisms, under Gilderfluke Pc•MACs computer show control software, brought the character’s innards to pulsating life; the same program controlled its arms, head, and facial expressions. Wires and cables delivered the figure’s gross movements, functioning somewhat like the strings of a marionette.

With approximately 8 million lights covering fifteen different scenes, Callaway Gardens is one of the largest holiday light shows in the country, if not the world.

Unlike most holiday displays, the lights and sound at Callaway Gardens are synchronized. When a frog hops across the scene, each takeoff and landing is accompanied by the appropriate sound effects.

For the last decade and a half, Callaway Gardens has used a mix of GilderGear for their displays, They started using PCs running our Pc•MACs and Pc•Pb software, with the lights networked together via DMX-512. They have since upgraded from the PCs to use a mix of Sd-10s for background audio, Sd-50s for synchronized sound and light, and Br-miniBrick8s for smaller scenes and effects and general light sequencing.

What began in 1992 as a small holiday lighting ceremony, the Festival of Lights is now a colorful cascade of over 4 million lights, and an assortment of animated characters and sculptures that decorate the entire façade of the historic Mission Inn & Spa.

“My Works”, designed, manufactured and installed by Engineering Creatives, is a new concept for interactive learning in the Yas Mall in Abu Dhabi. It is based around a series of stimulating pavilions that present fun educational experiences for groups of up to six children between the ages of 4 and 12 year, and an accompanying adult. Each pavilion takes approximately 20 minutes to complete.

Engineering Creatives, Managing Director, Clive Mockford observed, “The service we have received from Gilderfluke has been excellent, and we have deployed their audio playback and amplifier systems throughout the range equipment, covering sixteen pavilions. The units are flexible to programme in the context of our PLC systems from Beckhoff, whilst the design and build quality is such that the reliably in service is excellent. We have great confidence in the durability of the systems.”

The “Streets of Old Milwaukee” originally opened in January 1965. In honor of the “Streets” 50th anniversary, the exhibit was reimagined by further incorporating themed storytelling and a heightened sensory experience to give the visitor a different perspective on every visit.

Working closely with the Milwaukee Public Museum to enhance the visitor experience, Gilderfluke & Co.’s 4k video solution plays back scenes from Milwaukee at the turn of the 19th century through the windows of the life-size trolley car that serves as the entrance to the exhibit. In addition, Gilderfluke & Co. installed a full audio system with three separate audio zones with ‘live’ audio capabilities for events, as well as ‘triggered’ pre-recorded audio. Volume levels auto adjust per zone (area of the ‘streets’) based on the amount of noise in the area.

Tess, the 50 Foot Animatronic Woman at the California Science Museum

The original controls occupied nearly 2 full racks of equipment. The new GilderGear based system controls all the sound, video playback, animation and effects and it only occupies about 1/3 of one of the existing racks.

Through animatronics Tess blinks her eyes, her face registers emotion, her finger taps, one of her 30-foot-long legs stretches out, and her arm raises 27 feet into the air. To draw attention to her insides, Tess is outfitted with pulsating strobe and chaser lights that illuminate her circulatory, brain and nervous systems.

Autry Museum “Home Lands: How Women Made the West”

From ancient pueblos to modern suburbs, women have shaped the Western landscape through choices about how to sustain home, family, and community. Home Lands: How Women Made the West brings together women’s history, Western history, and environmental history to show how women have been at the heart of the Western enterprise across cultures and over time.

Historical artifacts, art, photographs, and biographies of individual women led visitors through three distinctive Western environments created and inhabited by women. The exhibition was at the Autry from April 16, 2010 -August 22, 2010 and then traveled to St. Louis, Tulsa, and Santa Fe.